A couple of weeks ago, Smartsheet pushed out a product update we called Abacus. It doesn't always happen that the code name for a release and its features relate, but this time the two fit together nicely, as the main feature unveiled was an improvement to our in-cell Formulas. With this release, users will be able to write formulas that cross into other sheets.

Until now, all formula data had to live in the same sheet, making it difficult to perform lookups or calculations on data in different sheets. There were workarounds, where users could use complex combinations of cell links and hidden columns, but these were fragile and difficult to use.

Now, with cross-sheet formulas, users only need a formula to calculate data from other sheets. But, coming up with the syntax that would be used to reference other sheets took some thinking.

Tae Kim, a long-time Software Development Engineer at Smartsheet, explained that figuring out how to label the references was key to making the formulas usable.

"Because our sheets are globally sharable," Tae said, "and our sheet ids are so long, we couldn't say, 'type in this long id and then Column A to Column B and then rows 1-5.' So, we decided to just create a simple name, and you can name it whatever you want."

Users can name their ranges using the Smartsheet UI, then use curly brackets to refer to the range in a formula. For example, if I had a named range named `Nov_Sales_Totals`, and wanted to find the SUM of that range, the formula would look like:

Enabling cross-sheet formulas was only one feature from the Abacus update. Check out the release notes to get the lowdown on all the other features that were launched.

The art for Abacus was created in-house, by a Smartsheet team member. Eric Heston is a Technical Recruiter here at Smartsheet who studied painting and sculpture in college, but found himself in the software industry after graduation.

"Recruiting came to me accidentally," Eric said. "I started in software testing, and I reached my contract limit at the company I was testing through at the time. The consulting agency I worked for put me on the bench...and I was growing increasingly more nervous by the day.

"At some point, the Director of Recruiting approached me and asked, ‘Hey, we're having a hard time finding your replacement for the project, could you take a look at a few resumes and help us go through them.’ So, I did and found someone very useful, and she offered to let me start on her team as a recruiter." 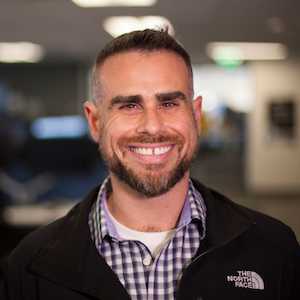 That career decision put Eric on a path that brought him to Smartsheet where he helps find new additions for the ever-growing Engineering team.

When asked to showcase his painting abilities for the Abacus release, Eric jumped at the opportunity, although the subject matter was a little daunting.

"I'm not, usually, a very technical painter, in terms of straight lines, and things like that," Eric said. "But, then I got this idea of superimposing the oldest calculator on top of a modern-day calculator. And, that's essentially what I did."

When designing the abacus calculator for the painting, Eric didn't realize that the positions he chose also held a second meaning.

"I picked the sequence of numbers 1-0-1-0-1, because it looked really balanced, but apparently it also represents the letter U [in binary]."